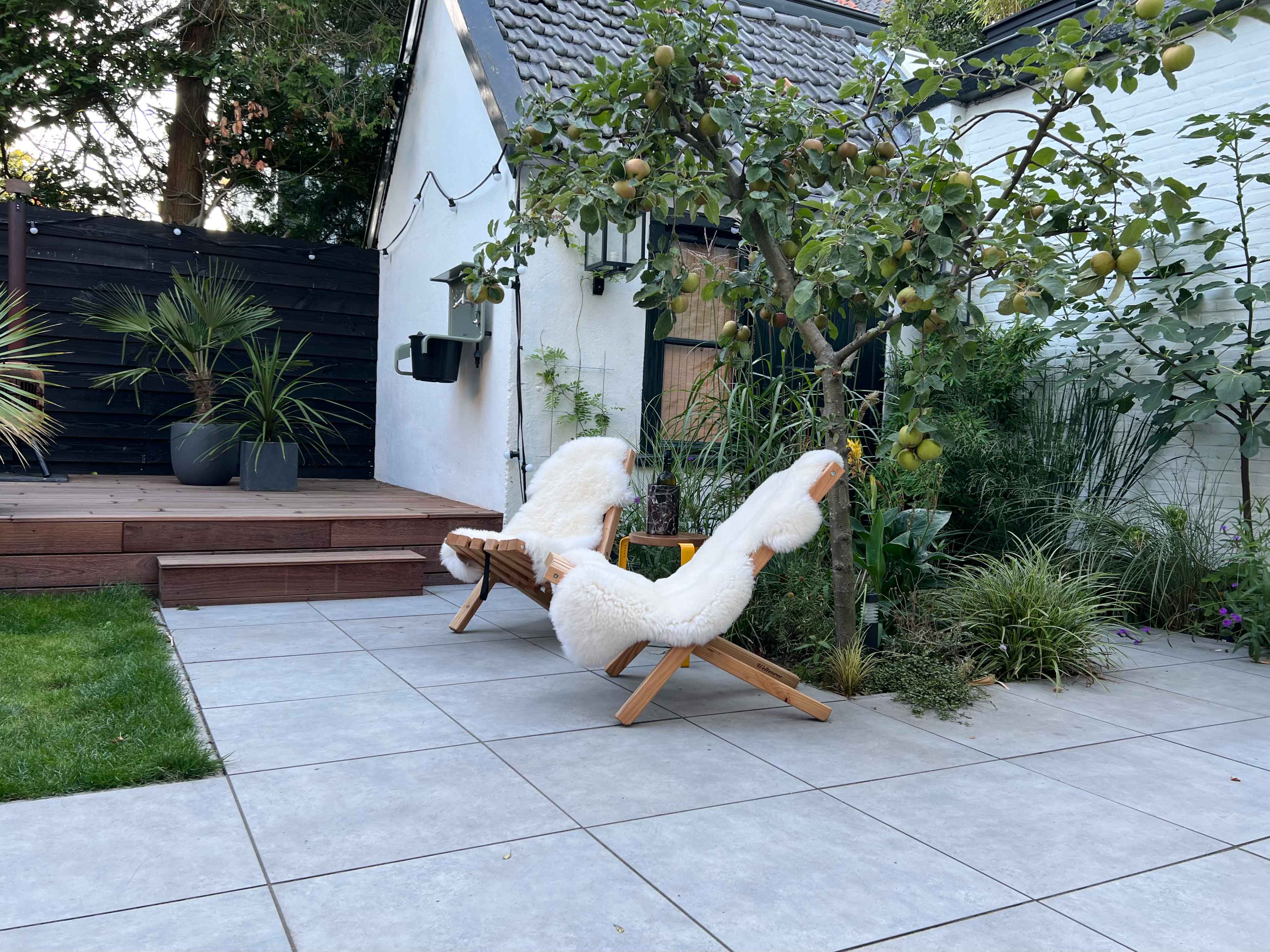 An Amsterdam city garden in the Gooi region

A peek outside with the 'Gooise Mannen'...
With Stoned Amsterdam, their interior brand for marble accessories, the 'Gooi Men' are taking the interior design world by storm. The name contains a reference to Amsterdam, where John ter Riet and Derkan Atakan have lived with pleasure for many years. The two have since exchanged the big city for a Manor House in Bussum, including a beautiful garden where the couple regularly organizes grand dinners.
They could hardly imagine ever leaving Amsterdam. Yet John and Derkan - creators of the @gooisemannen Instagram account - took the plunge a year ago. The 'entrepreneurs, interior lovers and film freaks' instantly fell in love with a 1902 Manor House in Bussum. Derkan wanted a property on the Amsterdam canal and John wanted a farmhouse outside the city. This house is the middle of our wishes, haha!' A tough but short renovation followed. Now the two of them live in the Gooi region, only 20 minutes from amsterdam, with great pleasure. When they're not working on Stoned Amsterdam, their exclusive brand for marble accessories, they relax in their film room (furnished with 10,000 DVDs and Blurays) or receive friends in their eye-catching garden.

'When we bought the house there was quite a bit of overdue maintenance to the house and garden,' the couple says. The garden was dark, the bushes wild and the trees untended. But we definitely saw the potential!' In the end, they left the best trees standing, including a fig and a beautiful holly. From their small Amsterdam garden, John and Derkan took their apple tree. This was given a new, prominent spot in the sun. 'The tree is doing like never before! It has never had so many apples.' John and Derkan had one goal: to create enough places in the garden to spend time with family and friends or just relax as a couple. 'In our opinion, we found the right proportion.'

Inspiration for the garden the two found close by: namely, in their own interior design tastes. 'We like a mix of natural materials. In the house we combine our own designs a wooden floor, chairs, a rug and a nice fabric sofa.' The couple carried that playfulness through to the outdoors. We don't like gardens that are too landscaped or too designed. You won't find landscaped flowerbeds surrounded by a boxwood hedge in our garden. It's a good mix, ranging from decorative grasses and a Verbena with a small purple flower to a holly or a palm. The abundance of greenery is combined with spacious terraces of cold concrete and warm wood and a few Weltevree classics. On the one hand you'll find the Weltevree Bended bench, on the other hand we also love the wooden Fieldchairs. The Sheepscoat finishes it off. A top combination!

Would they approach things differently now? John and Derkan don't have to think about it for long. When we renovated, we didn't have an idea for the front garden right away, so we left the design for what it was. The result is a front yard with a little bit of green, but mostly a lot of tiles. In the near future, we will be rocking the necessary tiles in the front yard to put greenery in.' In the meantime, the couple is thoroughly enjoying their gorgeous backyard, where they host get-togethers and dinners for friends and family all year round. 'Summer, winter, spring or fall: it doesn't matter to us. Our first Christmas in this house last year consisted of 5 Christmas days with alternating family and friends over. And yes, with 5 different Christmas dinners!'

So they definitely have some tips for outdoor dinners.
Tip 1: the drinks must be cold! And you can bet that Waterworks is going to help with that this summer, when we turn it into an outdoor bar with the bucket full of ice and cold water for the wine and beers.
Tip 2: better one good piece of organic meat - for example a tender steak - with large fresh salads than piles of BBQ packages from the supermarket. You then do not stand all evening looking at the glowing coals, but have time left for your guests.
And tip 3: Provide enough space to sit and preferably a large garden table where there is room for all your guests. Nothing more fun than all around the table, right? And also a piercing light or large parasol easily contribute to the coziness.' 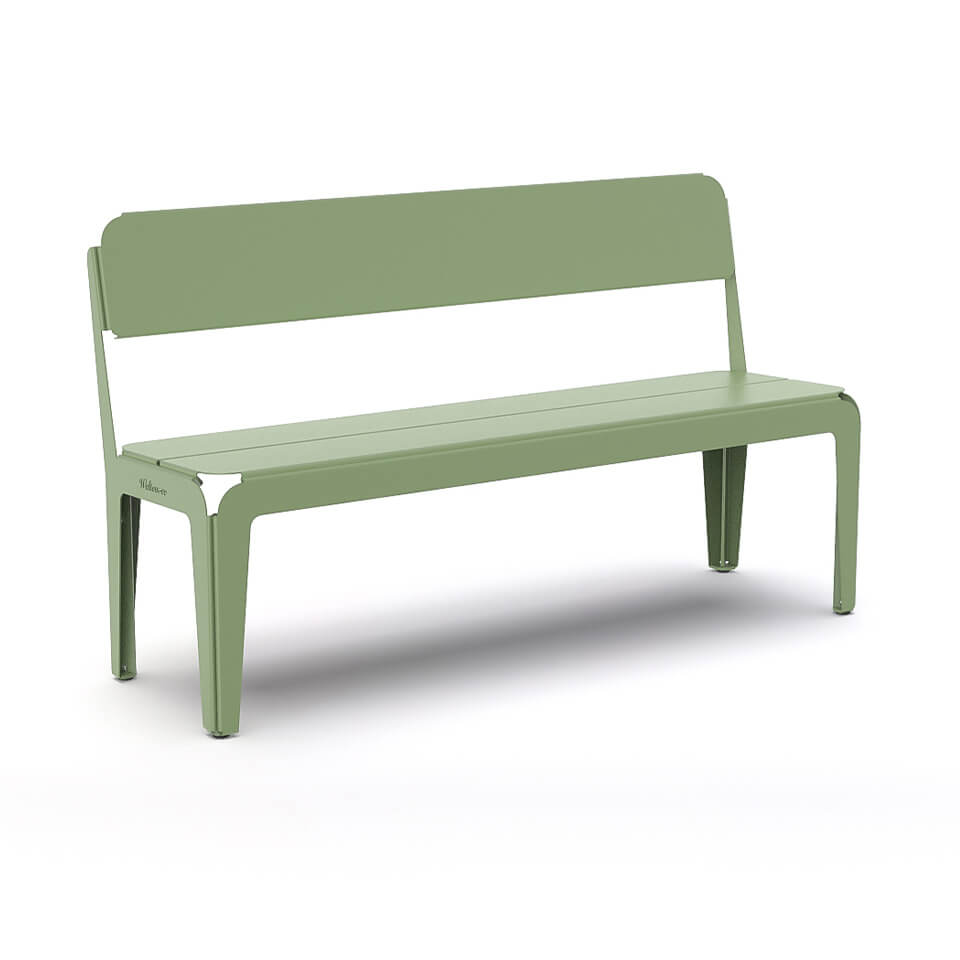 BENDED BENCH WITH BACKREST
The Bended Bench with backrest is part of the Bended Series, a unique and strong design by Jaïr Straschnow. The garden bench is easy to lift and move to a new spot thanks to its lightweight aluminum design. The curved aluminum plates are bent at 45 degrees and adapt flexibly to any surface, so the bench will never wobble. With the Bended Bench, create a fun seating area in the garden or balcony. Surround the bench with beautiful plants and add a coffee table. This way you will always have a nice place to drink your coffee. Use the bench in combination with our bended table garden table it forms a cozy dining area in your garden and make it extra comfortable with the bended cushion set.  Designed by Jaïr Straschnow, the Bended Series products are made of 3mm aluminum, which is 100% recyclable. Because the Bended products feature a powder-coated finish, they require little maintenance. You easily clean the products with a soft cloth and water. Everything in the Bended Series can be used indoors and outdoors and is available in light green or gray-blue.
€595.00
View Product 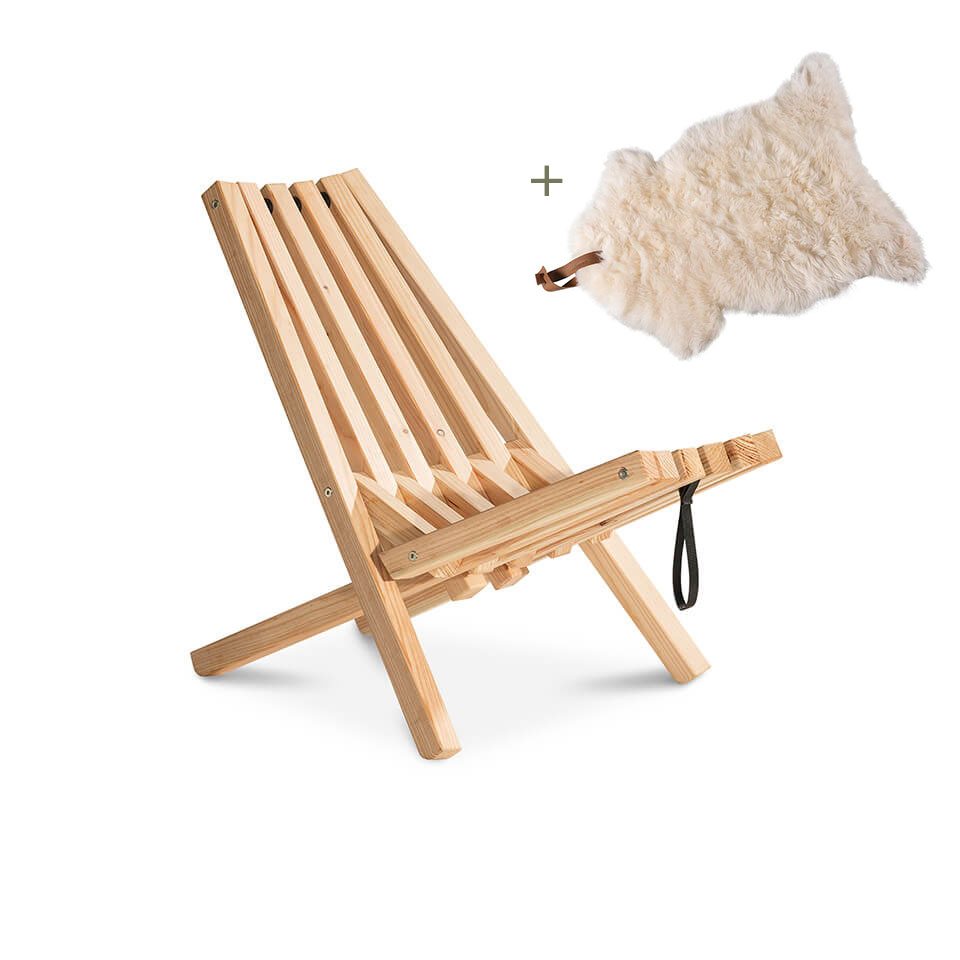 FIELDCHAIR + SHEEPSCOAT WHITE
Simplicity at its best: the clever construction makes this Fieldchair Lounge Chair very comfortable and easy to store. Find a nice spot in the garden and unfold the chair. Lean back and relax while enjoying the sunset, a good book or the crackling fire of the Outdoor oven. Grab a Sheepscoat for extra comfort.   The Weltevree Fieldchairs, designed by Floris Schoonderbeek, are made of sustainable Larch wood. To extend the life of your furniture, we suggest you to give it an oil treatment annually. With proper maintenance, folding and winter storage, you can enjoy the Fieldchairs for years to come.
Various options from €229.00
€328.00 WATERWORKS
The Waterworks creates order and coziness around the water connection in the garden or balcony. The Waterworks includes a worktop and a perforated wall. The worktop has a recess where the included bucket fits perfectly. Easily hang your garden tools using the 3 included S-hooks. Use the Waterworks to rinse dirty boots, wash fresh fruit, prepare food on it or turn it into a mini bar with the bucket as a wine cooler! The Waterworks, designed by Floris Schoonderbeek, upgrades your outdoor faucet into a water station and outdoor sink all in one! The wall unit is weatherproof thanks to its powder coating and is available in RAL 7033.
€379.00
This website uses cookies to ensure the best experience possible. More information...